PINK IS THE NEW BLACK 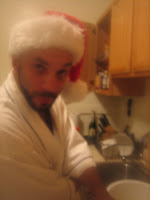 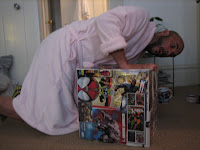 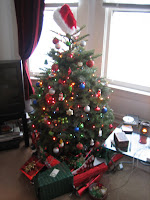 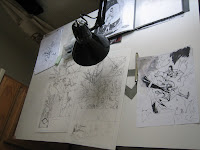 XMAS is over.At least for me it is. It's back to it. Back to the grinder. The "grinder" is exactly what it sounds like...

I received a brand new art set up which was pretty timely and inspiring thanx to the Skut. Who is now aptly named MS.MARVEL because she's awesome. I'd bee working with a rigged up ghetto-ized set up for awhile now...The table shifted at times because it was uneven on one side. The lamp light flickered for God knows what reason. ( personally i think it's because when i'm jamming out to say...DANZIG i'm smashing my pencils into the lamp shield like it's a drum cymbal or somethin'.) And my chair was an old school wooden get up. Not good for the back at all.

But as another year wanes away from us- I put away the old in with the new- and hopefully with the new table some better Chi.

Christmas was good to us.We had a rocking good tree.(as pictured)

and I recieved many goodies...(as pictured)

Pink is the new black yo.

Hope your Holidaze was as entertaining...

Enjoy the show-
Posted by MARK A. ROBINSON at 10:41 AM No comments: 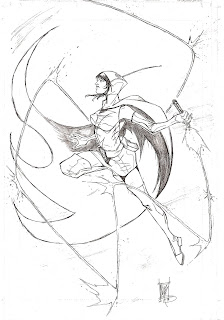 Posted by MARK A. ROBINSON at 2:12 PM No comments:

SO i totally believe my woman is psychic.

Months ago when I got word that the Storm Shadow series was getting canceled- and when i started sending out frantic panic portfolio emails to the BIG 2...she goes...

"I can see you working for both."

And it happened. I got DC work. Later I was asked to do some try out characters for Marvel. I really wanted Ghost Rider...But i digress...I did a Spider Man too...Wasn't too gah-gah over my Spidey--- but he was part of the test.

I heard no word on what I would be doing for weeks for the House of Ideas...

Then i get one of those preview books and Spider Man is plastered all over it. The next morning i wake up and Spider-Man has a message written all over his face on my drawing board.

And in two weeks...I get word i'm drawing Spider-Man.

Two days ago while Xmas shopping in Borders...She picks up this very popular magazine (she says i'm not allowed to say the name outloud or print it).

"I can see you working for these guys. You should email them. And I do."

The first email collapses and doesn't go thru. So i get wrapped up in my workload and forget it. She comes home and asks me what they said?

I tell her the email was never sent. She gives me the face.

"The face is the arched eyebrow. It looks alot like when Kirk says something ridiculaz to Spock."

So i send another one. This time to the editor in chief. When i realize that the first email was going to go to customer service.

Today I got a bounce back from that Editor.

I love that woman. Madonna apparently is not the only person with a Lucky Star. 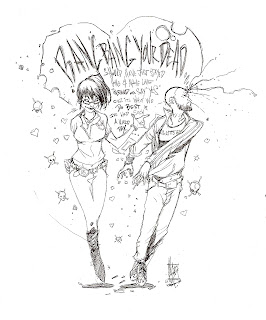 No pics today...Top secret stuff going on with my work related stuff and Ihaven't had time to work on anything but.

I'm doing Spider Man and i'm trying to do different things with the character.

Actually, i'm trying to do alot of different things with his movements that you'd might not usually see him doing.He's tough to nail down.

Creating alot of dynamics and whacky shot angles.AsI get further and further down the rabbit hole I'm not so sure If i'm the right guy to draw Spidey.

I go back and forth.

I'll tell you this...If i'm asked to do another I might have to consider passing. It's a draing project. Alot of pressure.

So for some ideas/inspiration i usually turn to Youtube. Because you tube is awesome.And not unlike MC Hammer...

You can't touch it.

I dunno if they let you post the link because it's not coming up...But just type in Russian Climbers and let the good times roll.

NO ONE IS INNOCENT 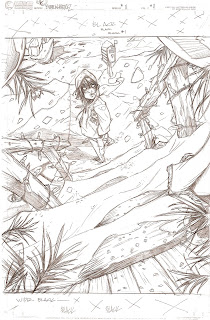 So...For about 3 years now i'll say i've been wrestling with doing my own stuff. And when I say "my own stuff" what I really mean to say is that i want to create and publish my own comic book creations...worlds, realities,whathaveyous..

During those three years i've also been busting my chops and taking swipes at the bit ( the Comic Biz) and getting myself established and finding my creative "Me" and so on... Things get lost in the shuffle every now and again.

BUBBLEGUM ROCKZ! is really no exception to this rule.

Ever since I watched Tekkonkinkreet recently (...and especially the extras within the commentary by the director Micheal Arias...) I've wanted to tackle something of my own.All that passion that endures in those extras made me feel i needed to attempt this finally.

So many other steps factored into the decision as well. Going "Indie" is not an easy mission statement.

There's the swing in economics. I, for one can't totally imerse myself in a project until i have most of my other projects off the board. Especially one like BGRz. I want to be fair to all my work. I am professional about my approach. So less time for "paying projects" more time for the baby.

It'll be tough i'm sure. But hopefully i can stick to this.

It's a special feeling brewing...butterflies? Nah--- it's something almost feel good about it.

But something is different when you put the pencil to something you know ultimately will be yours.

And no doubt will define your voice.

Because everyone will know it's you- no safety net. You just quit the band...You're solo.

I cannot wait to hear everyones thoughts on the work as it progresses...I will keep you as posted as possible without spoiling the whole story for you in the end.

In a nutshell this story will be about a friendship of two teenage girls from two totally different worlds yet reside in the same headspace. An opposites attract.And teenagers are fearless.

It's a story about what happens when influence becomes devotion and devotion slips into hero worship.

It's about two best friends living in a violent world.

And the only problem is that there isn't enough bullets. 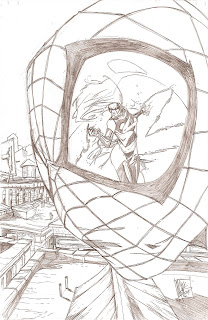 Sometimes you get "stuck".

If i'm stuck on a project I usually do these little "vignettes" to get in the mood. Or to inspire a feeling of what the hell i'm trying to do with the book, or Character or story...whatever.Not that it's required in the script or anything like that- It's kinda like me trying to find my idenity with it and so on...Hopefully you get my jist...

ANYWAYZ- With that being said- 
SO anywayz- this is a bit piece I've been on and off about since I started work on the Spider-Man project I've been pugging along on. Contrary to what I thought- Spidey has to be one of the hardest characters to get down.

It's been a mission to say the least and this takes my mind off the stress of ole' web head and it's always good practice.

Well- I'm going to try to stay on the topics of art here as oppose to Myspace where it went kinda all over the place. But in all fairness I'm a kinda "all over the place" type of fellow...So there you go...Expect the unexpected here.

This piece I'm calling "GIRLSCHOOL" because as Briny Fox proclaims..."it's where all the Babies Break All The Rules!"

I wanted movement for the piece. I knew from the start that I wanted Wonder Grrrl leap frogging somehow over Super Grrrl. And I also knew I wanted the magic lasso involved.

not so "magical" if there's a shit load of them out there ---But i digress.

WELCOME! and Thanks for dropping by...

So everybody can get their cherry popped together!